3D
Scan The World
4,473 views 188 downloads
Community Prints Add your picture
Be the first to share a picture of this printed object
0 comments

The marble portrait of King George III is signed and dated on the back 'From the Life by Jan Nost Sculp in 1767. John Nost the Younger, who was boron into the can Ost family of sculptors, was trained in London by Henry Scheemakers. He travelled to Dublin in 1749, and spent much of his subsequent working life in Ireland. He executed a number of portrait busts and public monuments, including a statue of George III for Dublin City Hall. His bust of the famous actor-manager David Garrick was apparently reproduced in many copies. Following the death of Garrick's widow, Eva in 1822, the contents of the couple's country villa and their apartment in the Thames-side Adelphi, London, was sold at auction in the capital in 1823. Intriguingly, the sale included a bust described as 'V. Nost, 1764. An early bust of his late Majesty, George III'. 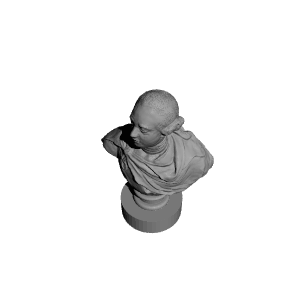