3D
Scan The World
3,570 views 187 downloads
1 collection
Community Prints Add your picture
Be the first to share a picture of this printed object
0 comments

Ghezo or Gezo was a King of the Kingdom of Dahomey, in present-day Benin, from 1818 until 1858. Ghezo replaced his brother Adandozan (ruled 1797 to 1818) as king through a coup with the assistance of the Afro-Brazilian slave trader Francisco Félix de Sousa. He ruled over the kingdom during a tumultuous period, punctuated by the British blockade of the ports of Dahomey in order to stop the Atlantic slave trade. Ghezo finally ended Dahomey's tributary status to the Oyo empire but also dealt with significant domestic dissent and pressure from the British to end the slave trade. He promised to end the slave trade in 1852, but resumed slave efforts in 1857 and 1858. Ghezo died in 1858, possibly assassinated, and his son Glele became the new king. 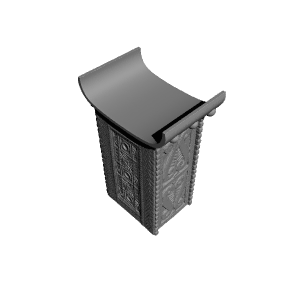 ×
1 collections where you can find King Ghezo's Throne at the Quai Branly, Paris by Quai Branly