King of the Ptolemaic period at The Nye Carlsberg Glyptotek, Denmark

3D
Scan The World
3,816 views 402 downloads
3 collections
Community Prints Add your picture
Be the first to share a picture of this printed object
0 comments

King of the Ptolemaic period at The Nye Carlsberg Glyptotek, Denmark

This Kouros style figurative sculpture is a larger than life granite piece believed to have originated from 200-150 BC in Egypt. The sculpture might have decorated a tomb to the unidentified king because of its sculptural style.

The Ptolemaic dynasty, sometimes also known as the Lagids or Lagidae was a Macedonian Greek royal family which ruled the Ptolemaic Kingdom in Egypt during the Hellenistic period. Their rule lasted for 275 years, from 305 BC to 30 BC. They were the last dynasty of ancient Egypt.

Ptolemy, one of the seven somatophylakes (bodyguards) who served as Alexander the Great's generals and deputies, was appointed satrap of Egypt after Alexander's death in 323 BC. In 305 BC, he declared himself King Ptolemy I, later known as "Soter" (saviour). The Egyptians soon accepted the Ptolemies as the successors to the pharaohs of independent Egypt. Ptolemy's family ruled Egypt until the Roman conquest of 30 BC.

All the male rulers of the dynasty took the name Ptolemy. Ptolemaic queens, some of whom were the sisters of their husbands, were usually called Cleopatra, Arsinoe or Berenice. The most famous member of the line was the last queen, Cleopatra VII, known for her role in the Roman political battles between Julius Caesar and Pompey, and later between Octavian and Mark Antony. Her apparent suicide at the conquest by Rome marked the end of Ptolemaic rule in Egypt. 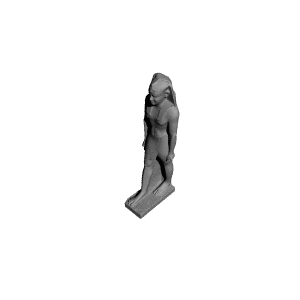 ×
3 collections where you can find King of the Ptolemaic period at The Nye Carlsberg Glyptotek, Denmark by geoffrey.marchal