3D
Featured Scan The World
8,452 views 269 downloads
3 collections
Community Prints Add your picture
Be the first to share a picture of this printed object
0 comments

This image of King Uthal is the finest of all the sculptures unearthed in Hatra and was discovered in the first stage of excavation in 1951 in the Third Temple - usually called Baalshamin Temple. The head and the body of this marble sculpture (which stands a little larger than life), were discovered separately. The reason seems to be that the statue had suffered the ravages of war when the Persian army under the command of Shapur I of the Sasanian Dynasty invaded Hatra.

A glance at the statue will make you feel the strong emphasis on the frontality of the image. This is the same characteristic which is apparent in the bronze statue of a Parthian nobleman (at the National Museum of Iran, see below) unearthed in the Shami Temple on the Iranian highlands. The King stands erect with his left lef placed forward, his left hand resting on the handle of his long sword and his right hand extended palm-outward in a prayer for peace. 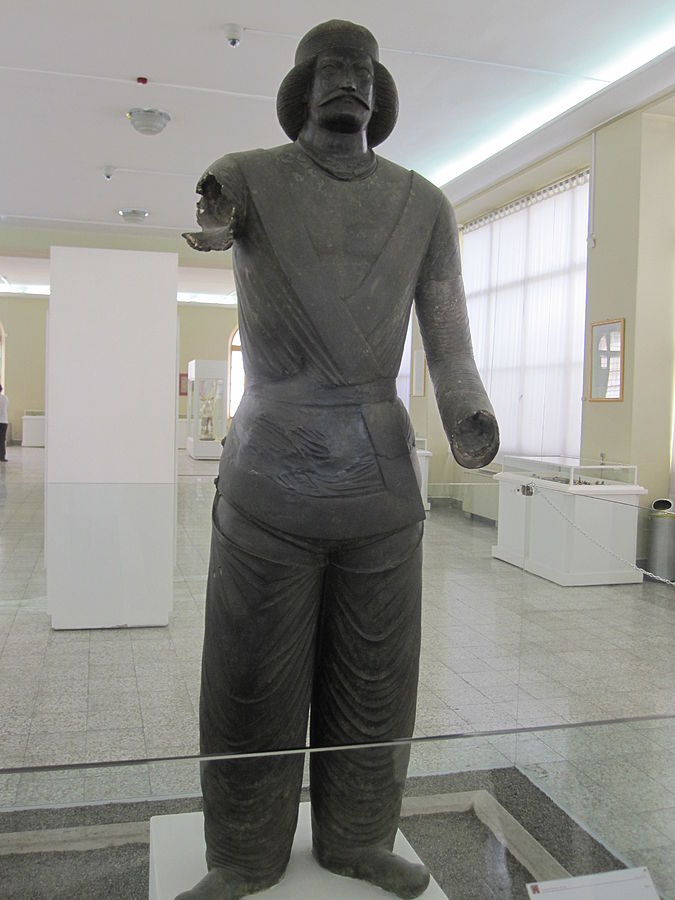 On his head rests a long crown peculiar to Hatra, while the trousers in the Parthian manner cover his lower form. On his upper frame, reaching as far down as his knees, is a long coat, on top of which the King wears an over-coat of furry material. Viewed from sideways, the peculiary Hatrian crown has a sprinkling of precious stones in squares composed of a series of pearl-like objects. The lower end of the crown is tied to the King's head by leathery strings. The extremities of the strings which come floating down the King's back are left unformed, as the back of the King himself is left unfinished.

The King has his eyes wide open - indeed, they look like apricots in form. The pupils of the eyes were slightly upward probably because of their near-upper-lid position. The nose is high and shapely, while a thick mustache hangs over the King's mouth, with both ends slightly turned upward.

Both of the King's ears are adorned with earrings, while rich bushes of sideburns expressed in simple carved lines in parallel transform themselves into beards.

The statue has a metal choker around its throat and a metal sword belt around its waist. At both sides of the buckle are open-work griffins with stately wings. On the part of the sword where the leather belt comes through, there are also open-work animals - this time without wings and which look like either lions or dragons.

On the surface of the upper coat, there are the same ornamental patterns as those found on the crown - comma-shaped beads (probably gems) composed of a series of pearl-like objects enclosed in squares.

The King wears a pair of shoes with points slightly extended outward. This pair of shoes is peculiar to the northern nomads and helped secure the horse-rider's feet in the double leather belts then used in place of stirrups.

In the front part of the flat, single-slab pedestal, there is an inscription in Aramic, which is still vivid with the vermillon paint scrubbed into it. As the inscription reads "The Image of King Uthal, the merciful, noble-minded servant of God, blessed by God", the statue is that of King Uthal. However, the personal history of the King himself is still in the dark.

The first series “Material Speculation: ISIS” is a 3D modeling and 3D printing project focused on the reconstruction of 12 selected (original) artifacts (statues from the Roman period city of Hatra and Assyrian artifacts from Nineveh) that were destroyed by ISIS in 2015. “Material Speculation: ISIS” creates a practical and political possibility for artifact archival, while also proposing 3D printing technology as a tool both for resistance and documentation. It intends to use 3D printing as a process for repairing history and memory.

Material Speculation: ISIS, goes beyond metaphoric gestures and digital and material forms of the artifacts by including a flash drive and a memory card inside the body of each 3D printed object. Like time capsules, each object is sealed and kept for future civilizations. The information in these flash drives includes images, maps, pdf files, and videos gathered in the last months on the artifacts and sites that were destroyed. These materials were sourced by an intense research process involving contacting different archeologists, historians, and museum staff (from Mosul Museum to archeologists and historians in Iraq and Iran).

On February 26, 2016, Allahyari published one of her reconstructions from “Material Speculation: ISIS,” as well as a dossier of her research, as part of Rhizome’s series The Download. Through this commission, her object file for King Uthal was made openly available to anyone for 3D printing.

She is currently working on finding a platform/museum for the release and the preservation of all the digital files and models from this project.

*Special Thanks to Shane O’Shea, Sierra Dorschutz,Patrick Delory, Christian Pramuk, and Mariah Hettel for their help with 3D modeling.

Morehshin Allahyari is a new media artist, activist, educator, and occasional curator. She was born and raised in Iran and moved to the United States in 2007. Her work extensively deals with the political, social, and cultural contradictions we face every day. She thinks about technology as a philosophical toolset to reflect on objects; a poetic mean to document the personal and collective lives we live and our struggles as humans in the 21st century. 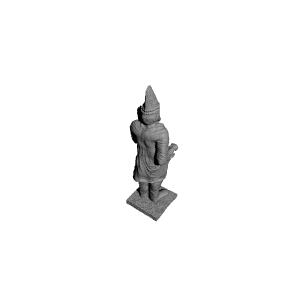