Kneeling Figure at The Sainsbury Centre for Visual Art, Norwich

3D
Scan The World
4,963 views 233 downloads
2 collections
Community Prints Add your picture
Be the first to share a picture of this printed object
0 comments

Kneeling Figure at The Sainsbury Centre for Visual Art, Norwich

The Aztecs or Mexica had created the last and most extensive of the pre-Hispanic polities by the time of the arrival of the Spaniards in 1519. Their language, Nahuatl, was the lingua franca of Mesoamerica at the beginning of the sixteenth century and is still spoken today by around a million people. Although the architectural complexes erected by the Aztecs may not have rivaled the temples of Teotihuacan in size, they were profusely embellished with stone sculptures. Free-standing monumental stone sculptures was not as widespread in Central Mexico before the post classic period; it is thought to have derived from earlier traditions on the Gulf Coast and elsewhere (see UEA 761). Aztec sculptors departed from their predecessors in many ways to develop new sculptural styles. These range from the rich, full forms of the animal sculptures to he more linear, hieratic, even blocky styles of some of the anthropomorphic figures.

In this sculpture, an aged, kneeling individual is depicted hunched over with head jutting forward and hands on knees. In the absence of iconographic details such as costuming associated with specific deities or other subjects, it is difficult to state with any certainty the identity of this figure.

Excavations at the main temple precinct of the Aztec capital have revealed sculptures with bright polychome paint intact (Matos Moctezuma, 1990). Such colour, along with other elements that may have once adorned the architectural and sculptural complexes, contributed to the overall vibrancy and power of the works. 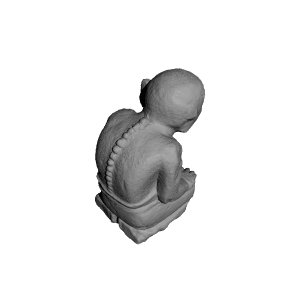 ×
2 collections where you can find Kneeling Figure at The Sainsbury Centre for Visual Art, Norwich by Scan The World