3D
Scan The World
4,551 views 187 downloads
3 collections
Community Prints Add your picture
Be the first to share a picture of this printed object
0 comments

This sculpture, originating from ca. 1275 BC, depicts Raia, an official in the sanctuary of Ptah, the chief God of Memphis. In this representation Ptah is represented on a hill from which the world was believed to have been created. On the pedestal of the statue and the shrine stand consecration inscriptions with the names of both Raia and Osiris. The side of the naos bears a picture of a djed-pillar, a symbol associated with Osiris, who represents sustainibility. The two falcons on top of the ba's are the souls of Re.

Raia was employed by the administration of the great temple of the god of Memphis, Ptah. The words House of Ptah is applied to the upper arms of his tomb image to maintain his relationship with this god emphatically in the afterlife.The image is of fine white limestone. Given the nature of the inscriptions that appear on it, it should be in a grave in the cemetery of Memphis stood at Saqqara. Another image of the same owner located in Cambridge.

The man is represented kneeling. He devotes a devout gesture a naos, a little gods shrine. This naos is a statue of his master, the Lord of Truth, Ptah. Which stands on a base which has the shape of the oerheuvel, the place from which line, according to the solar theology, the world has been created. The knielbeeld with naos in the New Kingdom a common picture type. Characteristic of the images of men and women from the late New Kingdom is the round, full face shape. Raia wearing a broad ceremonial wig and is dressed in a long, pleated skirt with no shirt. standing on the roof of the naos: The Osiris, the superintendent of the temple area, Raia, which found voice. The hieroglyphics on the frame containing offerbeden directed to (right :) Ptah, Lord of Truth, Sokar, the Lord of the Shetyt shrine, he may give pleasant breeze from the north to the Ka of the Head of the Administration of Ptah, Raia, which found voice and (left :) Ptah, Lord of Truth, king of the two Lands, Fair of Face, he may give water, bread, a cool breeze and incense, for the benefit of the palace servant of the Lord of the two Lands, Raia, which found voice.

On the left side of the naos shows a large djed-pillar. Which represents the backbone of Osiris and symbolizes the concept of sustainability. Two human-headed falcons with solar disks and gods beards are the ba's, the souls of the sun god Re. They stand for life, that every day arises at dawn on the eastern horizon from the dead body of Osiris. Around the base of the image is the text of a prayer offering to Ptah-Sokar and Osiris, gods of necropolis and Hades. The image has a wig to the rising back pillar. This one reads: Oh, Anubis, who is in his swaddling clothes, laying First of Ankh-tawi [name of the Memphite necropolis], you may your hands on the Osiris Raia, may you embrace his limbs and secure.Oh, Osiris, First of the West, Lord of Ankh-tawi, you may the Osiris Raia on your side places all parties in the Holy Land [necropolis]. 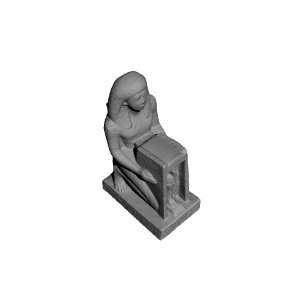