3D
Scan The World
1,746 views 78 downloads
Community Prints Add your picture
Be the first to share a picture of this printed object
0 comments

The sculpture portrays the bust of a female figure wearing a peplos (peplophoros). The fragmentary statue has been reworked around the fractures, and is reconstructed as the image of the offerer holding the hem of her dress in her  right hand, while with her left hand she offers a gift to the divinity. The statue's iconography and style belong to the kore typology.

The example at Palazzo Massimo was unearthed in an area of rome which in ancient times was occupied by the Horti Sallustiani, where the sculpture was reused in the gardens' ornamentation. The discovery of Roman copies of peplophoroi, in the area where the kore was discovered, suggests that the Greek original was included in the deisgn of the Horti as an example of great Prestige. 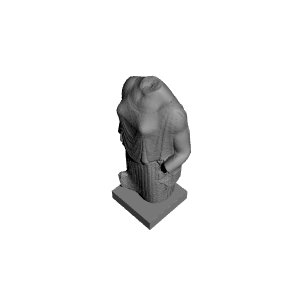 ×
0 collections where you can find Kore by Scan The World