3D
Scan The World
2,918 views 246 downloads
1 collection
Community Prints Add your picture
Be the first to share a picture of this printed object
0 comments

”Epiblema” is the term used for the long shawl draped loosely around the upper body of this figure. The term is also used in botany to describe the broken ‘skin’ that serves to absorb water to the roots of sprouting plants. The figure’s costume helps us date the figure as Late Archaic, approximately 520 BC: the dress is depicted in an extravagant and detailed manner, but the figure remains tightly composed around a central axis and wears the faint, flat “archaic smile” as her only facial expression. In the Early Archaic style the clothes would be portrayed more simply, and in later styles the smile disappears while the figures begin to twist more around their own axis.

A ”kore” (plural korai) is an Archaic sculpture depicting a female figure. Korai are always fully dressed, not partially or fully nude like the later Venus figures. The original figure would have been painted in bold colours with elaborate patterns on her dress.

Kore no. 761 was found in 1886 on Acropolis in Athens, just west of the Erechtheion, alongside a range of other figures. They had been hidden in a crevice in the rocks, possibly to salvage them from the Persian attack and torching of the place in 480 BCE. Archaeologists are still unearthing more parts of the figures, enabling them to continue to make the various sculptures more complete. This kore had a piece added to one arm in 2012.

This is a 3D scan of a plaster cast of the sculpture ‘Kore dressed in chiton and cape (epiblema)’ dated circa 530 BCE.

The scan is made from the cast (ref. KAS1800) in The Royal Cast Collection at SMK – National Gallery of Denmark. 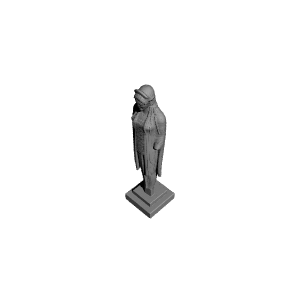