Welcome to Morocco! Bienvenue a Maroc!

The Minaret of the Koutoubia Mosque is the landmark of the Moroccan city of Marrakech.

The Koutoubia (or Kutubiyya) Mosque is the biggest and most important in Marrakech, once an imperial city and capital of Morocco. "Koutoubia" means booksellers, and it is named like that because it is located in what used to be the neighborhood of this trade. The mosque was finished during the reign of Almohad Caliph Yaqub al-Mansour (1184-1199). This minaret is the first of 3 sister towers; the other two being La Giralda in Seville, Spain, and the Hassan Tower in Rabat, Morocco, both modeled after the Koutoubia's.

MiniWorld 3D is excited to bring this charming model to life, dedicated to the people of Morocco. It was modeled from scratch by hand and brain in Autodesk Fusion 360, please give credit, it's all about spreading culture and education!

MiniWorld 3D is the collection of 3D printable models of landmarks of the world.

All photos by MiniWorld3D except when noted. Comparison showing print at 100% and 200% , hand-painted with acrylics, printed with Fillamentum Mukha.
Third photo by @imprimelobonito

Easy print, use best quality to preserve the details, or scale up. No supports are needed. 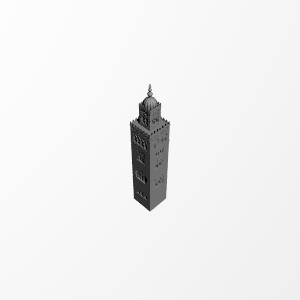