L'Amitié (Friendship) at The Louvre, Paris

3D
Scan The World
3,659 views 268 downloads
Community Prints Add your picture
Be the first to share a picture of this printed object
0 comments

L'Amitié (Friendship) at The Louvre, Paris

This larger than life marble sculpure of a woman was sculpted by Cristoforo Sati (1556-1619) completed in Rome in 1619, making it the last sculpture he worked on before his death. It was originally placed in the Mattei Villa in Rome before being moved ino the permanent collection of the Louvre, Paris.

The sculpture, named 'L'Amitié' (translation: Friendship) depicts a nude female with her left hand to her breast. Many books have studied her form in regards to psychology, her left hand raised to her breast can resemble both a heartfelt moment of friendship or an act of submission. She looks down, raised on a plinth to the viewer. Her fingers on her raised hand appear to open a wound where her heart would be. 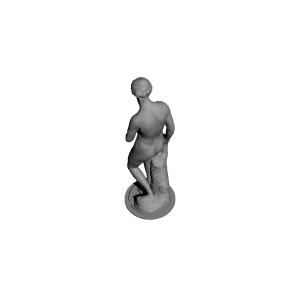 ×
0 collections where you can find L'Amitié (Friendship) at The Louvre, Paris by Scan The World