3D
360°
2,869 views 111 downloads
2 collections
Community Prints Add your picture
Be the first to share a picture of this printed object
0 comments

Left Center Right is a great dice game that can be upgraded to LCR Wild by changing the color of one of the dots.

Each player receives at least 3 chips, Coins or even lotto scratch tickets. Players take it in turn to roll three six-sided dice, each of which is marked with "L", "C", "R" on one side, and a single dot on the three remaining sides. For each "L" or "R" thrown, the player must pass one "chip" to the player to their left or right, respectively. A "C" indicates a "chip" to the center (pot). A dot has no effect.

If a player has fewer than three chips left, they are still in the game but their number of chips is the number of dice they roll on their turn, rather than rolling all three. When a player has zero chips, they pass the dice on their turn, but may receive chips from others and take their next turn accordingly. The player who does not receive chips after two passes is out of the game. The winner is the last player with chips left.

LCR wild is very similar to the original... but with one small twist.  Each die contains the letter "W" which as you can probably guess, stands for "Wild".  Here's what happens when you roll Wild(s):
Show more Show less
License
Printing Details 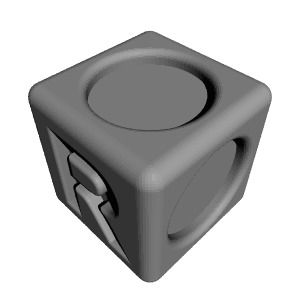