3D
Scan The World
1,718 views 60 downloads
Community Prints Add your picture
Be the first to share a picture of this printed object
0 comments

Thanks to a street and a college that bear his name, the child of the country continues to do honor to the municipality.

Born just a month after the death of Jean-Baptiste Carpeaux (whose aesthetics he placed at the antipodes), raised in the Catholic faith, he grew up in front of the church of Saint-Jacques, in a house now destroyed And replaced by a real estate complex. He attended communal school.

Obtaining an 8/10 in drawing to the certificate of studies seemed to predestiner to the career that is known to him. Short hair and beard provided, face both smiling and melancholic, he began as an industrial designer. A path traveled with conviction

From ease and passion, he did not need more to follow an artistic curriculum, talent and tenacity helping, despite the reluctance of his parents. His journey was similar to a marathon: contests, medals, round-robin and bas-relief. In 1902 he took courses in the biggest schools of the period (Valenciennes Academies, Beaux-Arts in Paris). In 1902, he won the famous First Grand Prix of Rome, welcomed on his return by the cheering crowd and the mayor, Émile Weil-Mallez. This victory opened the door to public and private commissions, some for the French Comedy. He spent four years at the Villa Medici in Rome and then opened his studio in Paris. In 1922, he was sacred knight of the Legion of Honor. 1914-1918, Alphonse Terroir also produced two sculptures by Chateaubriand and Diderot, which adorn the Pantheon in Paris.

He is buried beside his parents, under the statue he created: "The man before death is gathering and praying." The first tribute paid by the town of Marly was the inauguration of a bust at the crossroads of Romainville, at the time when Oscar Carpentier was mayor. Some works are installed in the Valenciennois: "L'Orphelin" in the garden of the Rhonelle; The monument to the Abbe Delbecque, avenue Dampierre, opposite the Sacré-Coeur church; The monument of the Renaissance, in front of the Lycée Wallon; The statue of Ernest Macarez, at Haulchin, & c. Jean-Claude Poinsignon, co-founder of the magazine Valentiana, devoted a book to him, With the limon of the earth: life and work of the statuary, Alphonse Terroir, bringing lightly its contribution to the collective memory . 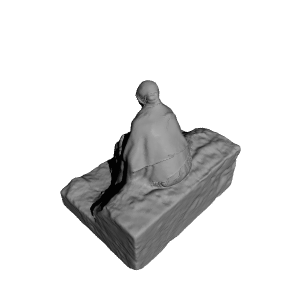 ×
0 collections where you can find L'orphelin by Scan The World