3D
Scan The World
4,738 views 228 downloads
Community Prints Add your picture
Be the first to share a picture of this printed object
0 comments

This is a lifesize marble sculpture created in the late 1800s by Jules Blanchard (1832-1916), the Italian title 'La Bocca Della Verita' translates to The Mouth of Truth. The sculpture takes reference to the Roman legend that one cannot remove his hand from the mouth of truth if he never lied .

The sculpture is a personified example of the original 'La Bocca della Verità' which is an image, carved from Pavonazzo marble, of a man-like face, located in the portico of the church of Santa Maria in Cosmedinin Rome, Italy. The sculpture is thought to be part of a first-century ancient Roman fountain, or perhaps a manhole cover, portraying one of several possible pagan gods, probably Oceanus. Most Romans believe that the 'Bocca' represents the ancient god of the river Tiber.

The most famous characteristic of the Mouth, however, is its role as a lie detector. Starting from the Middle Ages, it was believed that if one told a lie with one's hand in the mouth of the sculpture, it would be bitten off. There was also a medieval legend, wrongly believed to originate with the Roman poet Virgil, of an adulterous empress who managed to deceive her husband in a trial using the Mouth. This is an infrequent subject in medieval and Renaissance art, forming part of the Power of Women literary topos. The piece was placed in the portico of the Santa Maria in Cosmedin in the 17th century. This church is also home to the supposed relics of Saint Valentine. 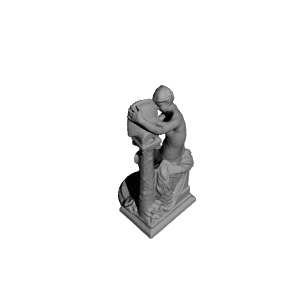 ×
0 collections where you can find La Bocca Della Verita at the Jardin du Luxembourg, Paris by Scan The World