3D
Scan The World
3,930 views 421 downloads
2 collections
Community Prints Add your picture
Be the first to share a picture of this printed object
0 comments

Several years after the death of the sculptor Aristide Maillol (1861 - 1944), his muse and model Dina Vierny donated to France works of the artist to make him known to the general public.

La Méditerranée is a bronze sculpture created in 1905. It represents a naked woman sitting, the left knee raised, the left elbow resting on this knee and the head resting on the left hand. The sculpture leans on his right arm and his right leg is extended to pass under his left leg.

The sculpture has been installed since 1964 in the garden of the Carrousel in the Tuileries, in the 1st arrondissement of Paris. It is part of a group of statues of Maillol exposed in the open air.

Aristide Maillol died on September 27, 1944 in Banyuls-sur-Mer, where he spent most of his life. In the garden of the museum dedicated to him, a statue of a woman representing the Mediterranean adorns her tomb. 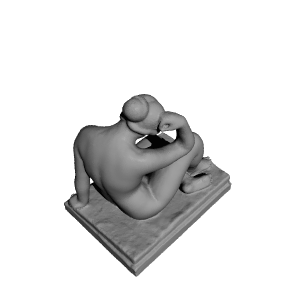