3D
Scan The World
2,323 views 165 downloads
1 collection
Community Prints Add your picture
Be the first to share a picture of this printed object
0 comments

This sculpture is by Pierre-Jules Cavelier (Paris 30 August 1814 – 1894 Paris) - a French academic sculptor. The son of a silversmith and furniture maker, Cavelier was born in Paris. He was a student of the sculptors David d'Angers and the painter Paul Delaroche, Cavelier won the Prix de Rome in 1842 with a plaster statue of Diomedes Entering the Palladium. The young sculptor lived at the Villa Medici from 1843–47. Appointed in 1864 Professor at the École des beaux-arts, he trained many students there, including Édouard Lantéri, Hippolyte Lefèbvre, Louis-Ernest Barrias, Eugène Guillaume, the British Alfred Gilbert and the American George Grey Barnard, as well as conducting his own prolific career as a sculptor. 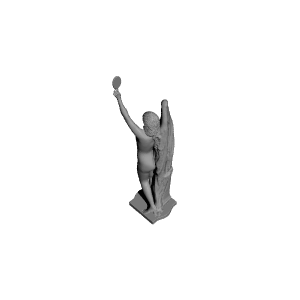 ×
1 collections where you can find La vérité at the Palais des Beaux-Arts de Lille, Paris by Scan The World