3D
Scan The World
2,259 views 57 downloads
Community Prints Add your picture
Be the first to share a picture of this printed object
0 comments

Just as the painted profile portrait developed into a three-quarter view around 1470, Verrocchio continued to transform the sculpted bust. His sitter holds a nosegay of flowers to her bosom in a very romantic pose; she is shown to below the waist, including her two hands, implying interaction with the viewer. This innovation was clearly not lost on Verrocchio's pupil, who would exploit its potential as well as its luminosity in his painted portrait. Indeed the sitter of this bust has sometimes been identified as Ginevra dei Benci, the subject of a Leonardo portrait. However, although withoit proof, it is generally assumed she is Lucrezia Donati.

Lucrezia Donati was one of the mistresses of the Medici, perhaps, one of Lorenzo the Magnificent's who had the longest tenure. She is immortalized here by Verrocchio as Woman with a Bouquet. An absolutely extraordinary work in particular because, and this is what the Florentines admired the most, the beauty of her hands. They have this jointless quality, or one that transcends joints; Botticelli would immortalize the same qualities in his painting. It should not be forgotten that Botticelli and Verrocchio were very friendly.

This is one of the most beautiful of the Florentine busts. 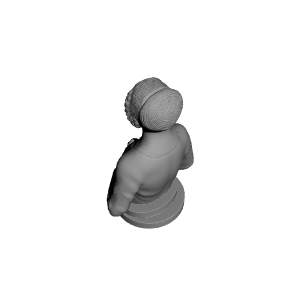