3D
Scan The World
2,251 views 102 downloads
Community Prints Add your picture
Be the first to share a picture of this printed object
0 comments

Joseph-Louis Lagrange (25 January 1736 – 10 April 1813) was an Italian Enlightenment Eramathematician and astronomer. He made significant contributions to the fields ofanalysis, number theory, and both classical and celestial mechanics.

In 1766, on the recommendation of Euler and d'Alembert, Lagrange succeeded Euler as the director of mathematics at the Prussian Academy of Sciences in Berlin,Prussia, where he stayed for over twenty years, producing volumes of work and winning several prizes of the French Academy of Sciences. Lagrange's treatise onanalytical mechanics (Mécanique Analytique, 4. ed., 2 vols. Paris: Gauthier-Villars et fils, 1888–89), written in Berlin and first published in 1788, offered the most comprehensive treatment of classical mechanics since Newton and formed a basis for the development of mathematical physics in the nineteenth century.

In 1787, at age 51, he moved from Berlin to Paris and became a member of the French Academy. He remained in France until the end of his life. He was significantly involved in the decimalisation in Revolutionary France, became the first professor of analysis at the École Polytechnique upon its opening in 1794, founding member of the Bureau des Longitudes and Senator in 1799. 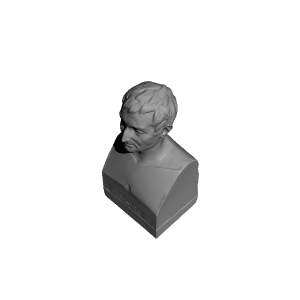 ×
0 collections where you can find Joseph-Louis Lagrange at The Borghese Gardens, Rome by Scan The World