3D
Scan The World
2,240 views 112 downloads
1 collection
Community Prints Add your picture
Be the first to share a picture of this printed object
0 comments

Lakshmi (/ˈləksmiː/; Sanskrit: लक्ष्मी, IAST: lakṣmī) or Laxmi, is the Hindu goddess of wealth, fortune and prosperity. She is the wife and shakti (energy) of Vishnu, one of the principal deities of Hinduism and the Supreme Being in the Vaishnavism Tradition.

Lakshmi is also called Sri or Thirumagal because she is endowed with six auspicious and divine qualities, or gunas, and is the divine strength of Vishnu. In Hindu religion, she was born from the churning of the primordial ocean (Samudra manthan) and she chose Vishnu as her eternal consort. When Vishnu descended on the Earth as the avatars Rama and Krishna, Lakshmi descended as his respective consort. 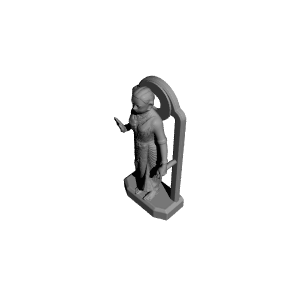 ×
1 collections where you can find Lakshmi by Scan The World