3D
Scan The World
4,199 views 285 downloads
7 collections
Community Prints Add your picture
Be the first to share a picture of this printed object
1 comments

The llama (Lama glama) is a domesticated descendent of the guanaco (L. guanaco) (Nowak, 1991). Evidence for domestication dates back between 6000 and 7000 years ago and has been found from archaeological sites in the Andean mountains at elevations ranging from 4000 m to 4900 m (Wheeler, 1995). The species is currently distributed from Peru to northwest Argentina (Nowak, 1991).

The llama belongs to the group Camelidae, which includes all species of South American and Old World camelids. Altogether, there are three genera within camelidae, Lama and Vicugna in South America and Camelus in the Old World (Wheeler, 1995). 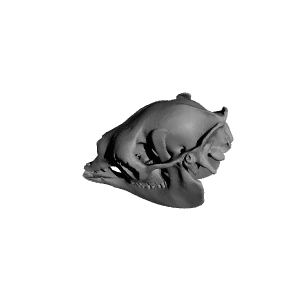 ×
7 collections where you can find Lama glama, Llama by Digimorph