3D
Scan The World
9,524 views 1,055 downloads
1 collection
Community Prints Add your picture
Be the first to share a picture of this printed object
0 comments

The figure of the Dead Christ is supported by the Virgin and St John the Evangelist, with St mary Magdalen. The group was made in five pieces. The figure of Christ, with the hands of St John and the Virgin attached was cut in two to fit into the kiln for firing. The Magdalen was broken during the original firing, probably due to air being trapped in the clay which expanded when heated. This prevented a second firing for the tin-glazing and the figure was therefore painted instead. On acquisition the group was stated to have been 'formerly in a private chapel in Siena.' 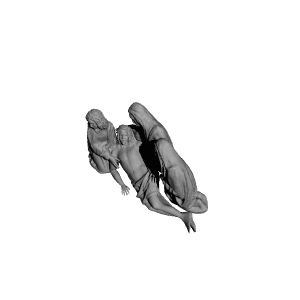 ×
1 collections where you can find The dead Christ with the Virgin, St John and St Mary Magdalene; a Pieta by vam