This object was made in Tinkercad. https://www.tinkercad.com/things/j40dcVDgpaS

The Story Of Lando The SharkPup

Born in a far a way galaxy, Lando is a part of a major space colonization of many different mixed species. Their organization works on keeping the galaxy safe, while maintaining a peaceful life on their home planet. Lando was born on this planet, learned to speak their native language, then became an officer in his home planet military. He dawns a shark fin on his back, much like his father, and a dog face like his mother. While out on a mission with his crew, Lando’s ship experienced major turbulence, which destroyed all communication with other crews and forced them to land on Earth. The crew, unknowing of their surroundings, invaded many Seven Elevens then got separated when chased out by an old lady with a broom. A little girl found Lando and figured he was an ordinary dog wearing an odd costume, and brought him home. She read his dog tag which obviously read, “ Lando “ and kept his name. Of course her parents weren’t too thrilled and made him leave, but every night the little dog sat outside her window and barked for her, bringing her joy. Eventually, Lando’s family came back for him in their ships, but he refused to go home! There he stayed, on earth, and kept it safe from all the galaxy’s harm. 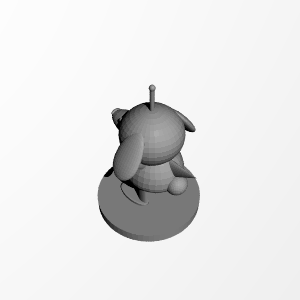 ×
0 collections where you can find Lando by Val1