Laocoön and His Sons

Laocoön and His Sons

The statue of Laocoön and His Sons, also called the Laocoön Group (Italian: Gruppo del Laocoonte), has been one of the most famous ancient sculptures ever since it was excavated in Rome in 1506 and placed on public display in the Vatican, where it remains. It is very likely the same statue praised in the highest terms by the main Roman writer on art, Pliny the Elder. The figures are near life-size and the group is a little over 2 m (6 ft 7 in) in height, showing the Trojan priest Laocoönand his sons Antiphantes and Thymbraeus being attacked by sea serpents.

The group has been called "the prototypical icon of human agony" in Western art,  and unlike the agony often depicted in Christian art showing the Passion of Jesus and martyrs, this suffering has no redemptive power or reward. The suffering is shown through the contorted expressions of the faces (Charles Darwin pointed out that Laocoön's bulging eyebrows are physiologically impossible), which are matched by the struggling bodies, especially that of Laocoön himself, with every part of his body straining. 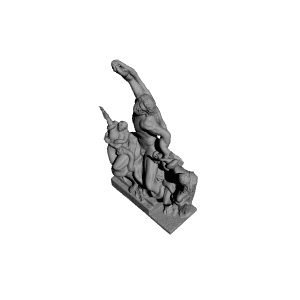 ×
7 collections where you can find Laocoön and His Sons by Scan The World
×
Mat Broomfield
@MatBroomfield
1
Printed on: Creality CR-10
Material: PLA
Posted at: 28th September 2022

Great scan but the fingers and that arm on the left are so hard to remove from support. The arm snapped no matter how careful I was. In the end after multiple attemps, I just welded it back. Printed here at 15CM, .4mm layer height.

25 cm high with a little of finishing. I had big problems removing supports, hope i find a solution