3D
Scan The World
2,997 views 198 downloads
1 collection
Community Prints Add your picture
Be the first to share a picture of this printed object
0 comments

This relief depicts the central episode of the myth of the god Mithras, according to an established iconography, illustrating the slaying of the bull inside a grotto. Traces of the original colouring can be seen on the original marble. The relief was found in 1964 at Tor Cervara during work to remove wartime debris and it was probably the explosion of a piece of ordnance that broke the relief into more than fifty pieces.

In the meantime the fragment depicting the deity's head had ended up in the Karlsruhe Museum where, at the end of the 1980s, it was identified as belonging to this relief. As part of a recent collaborative agreement, the Badisches Landesmuseum of Karlsruhe has provided on loan the fragment depicting the face of Mithras. This has allowed the relief to be reconstructed in its entirety.

Reconstruction was carried out at Karlsruhe with close collaboration. It was a particularly complex and difficult process due to the size and weight of the piece, and the position of the fragment, forming a sort of keystone between two large sections of the relief. 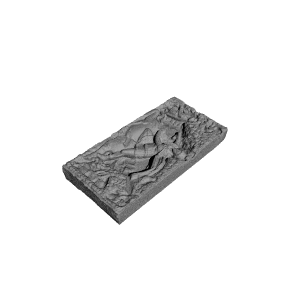