3D
Scan The World
2,923 views 129 downloads
1 collection
Community Prints Add your picture
Be the first to share a picture of this printed object
0 comments

One of the great Art Deco piles of Chicago, the LaSalle-Wacker Building is based on a classic design, but doesn't take itself too seriously. This is one of the few buildings of its era that still embraces and celebrates its heritage. Instead of pretending to be something modern, it illuminates its light wells at night in colored flood lights. Its crowning spire can't compete with those on the nearby Willis Tower so it sticks a defiant neon finger into the night air to get noticed. A finger that is decked out in Art Deco glory. Structurally, the building is a classic 1930's skyscraper. A giant H formation on the lower part of the building allows light into the interior. Atop this is a narrow tower which offers great views while sharing the available light with its neighbors and pedestrians. This is what Chicago architecture was once all about -- the little artistic flourishes that set one brick or limestone-clad building apart from the other. The building, itself, represents a vanishing piece of history. And if you really want to look for vanishing history, check out the art deco ash trays that still exist at the ground level, though smoking has long been banned from the doorways of Chicago buildings. We are forunate that this building has a location along the river, or it would be forgotten like so many other Art Deco masterpieces crowded into obscurity in the grit of Chicago's Loop. 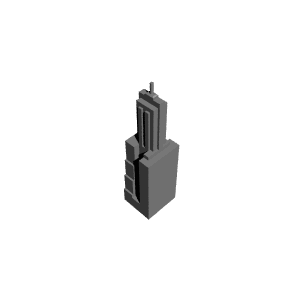 ×
1 collections where you can find LaSalle-Wacker Building in Chicago, Illinoise by jkurstin22