3D
360°
2,195 views 104 downloads
2 collections
Community Prints Add your picture
Be the first to share a picture of this printed object
5 comments

The last Golden Horn is a magical creature that grants beings special powers. But you must know is true birth name in order to receive these powers. The ability to do so has caused worldwide hunting of this majestic animal to almost near Extinction on the planet Zoe.

For more corny backstory that I created 20 years ago in high school, of the planets Zoe see my other prints.

This object was made in Tinkercad. https://www.tinkercad.com/things/3YqgURWCiR6 #TinkerCharacter @MyMiniFactory @tinkercad this is made completely in tinkercad. I love this program it's new to me. There's two versions of this model one has no base if you prefer. The reason I place the base on the model is for ease of printing and I believe the supports remove a little easier.

Golden horns real name is unknown. He hails from a planet Zoe in a distant Galaxy where they transplant creatures as a science experiment. His Kind was hunted to near Extinction. They were hunted for their golden horns which possess magical powers. But their magical powers can only be harnessed if you know their true birth name. He Is now in hiding. Under the protection of the mighty jester.

Check out some of my other prints to find out more about the planet Zoe.

Supports and good to go. I placed the bass in this model for better layer adhesion. 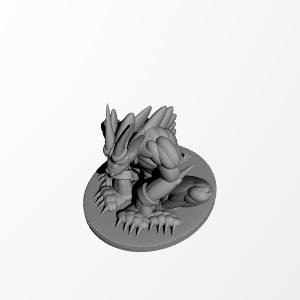