3D
Scan The World
2,220 views 97 downloads
Community Prints Add your picture
Be the first to share a picture of this printed object
0 comments

This is a fictional portrait of an actor in decline, the bust is part of a series of works of 'épaves (wrecks)' and 'désolés (apologies)' as said by its critics. It is paradoxically dedicated to the actor Coquelin Cadet, a friend of the sculptor Carriès. The fine quality of the bronze and the beauty of the patine are evidence of an exemplary association between Carriès and the founder Pierre bingen, a promoter of handmade lost wax crafting.

Jean-Joseph Marie Carriès (February 15, 1855 – July 1, 1894) was a Frenchsculptor, ceramist, and miniaturist. Born in Lyon, Carriès was orphaned at age six and was raised in a Roman Catholic orphanage. He apprenticed with a local sculptor then in 1874 moved to Paris to study at the École des Beaux-Arts under Augustin-Alexandre Dumont. He first showed at the Paris Salon of 1875 and gained considerable recognition for his sculpted busts at the Paris Salons of 1879 and 1881. However, after seeing an exhibition of Japanese works at the 1878 World's Fair in Paris, he began to devote himself to the creation of polychrome Horror Masks. 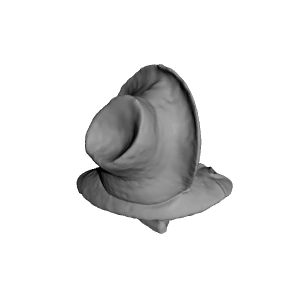 ×
0 collections where you can find Le Cabotin at The Petit Palais, Paris by Scan The World