3D
Scan The World
2,844 views 270 downloads
2 collections
Community Prints Add your picture
Be the first to share a picture of this printed object
0 comments

Carpeaux was known for his large, multi-figure monuments and sculptural portraits created for the court of Napoleon III.  In 1867, Carpeaux received a commission to design a fountain for the Luxembourg Gardens in Paris.  The monument he designed, Four Parts of the World Holding the Celestial Sphere (also known as the Fountain of the Observatory, completed in 1872), personifies the continents of Africa, America, Asia, and Europe as women.  Because he had difficulty finding a Chinese woman to pose for the continent of Asia, he worked from a male model. This bust is based on one of these earlier sketches.

Here, Carpeaux pushes the limits of the bronze medium in his expressive surface textures and carefully controlled variations in patina color for the garment, hair, and face.  In a departure from traditional bust portraits, he creates a dynamic, twisted posture using the serpentine braid to intensify its impact. 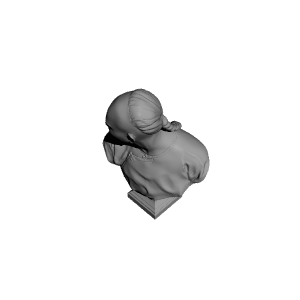