3D
Scan The World
1,883 views 57 downloads
Community Prints Add your picture
Be the first to share a picture of this printed object
0 comments

Jean-Michel Folon (1934-2005) was a painter, draughstman, watercolorist, illustrator, graphic designer and sculptor. Despite studying architecture he quickly dropped it to devote himself to drawing. He produced short films and illustrated a book published by MoMA in New York.

Between 1969 and 1970 he held his first exhibition in Tokyo where he exhibited this sculpture and a series of watercolours. His main inspiration is reflecting the sensitivity and loneliness of today's world with undertones of humour. Many of sculptures follow the similar style of a lonely man placed in a banal or absurd environment (much as in this sculpture he is placed in a pond).

From the press, "He pays attention to ordinary things, from the birds and the moon, to hell and erosion".

It is difficult model, it should be printed big enough, otherwise book's pages will not be able to print. Other than this, there is small amount of supports on the model. Enjoy your print. 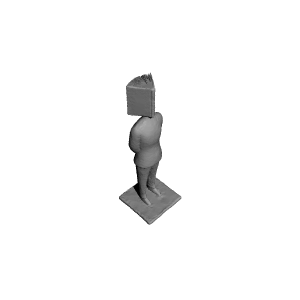 ×
0 collections where you can find Le Saveur, Hiddelheimlaan, Belgium by Scan The World