3D
Scan The World
2,048 views 155 downloads
Community Prints Add your picture
Be the first to share a picture of this printed object
0 comments

This effigy, carved in the sandstone, is the figure of Rishabhanatha (or Adinatha), the first of the twenty-four Jain Tribthankhara. Jainism knows twenty-four masters responsible for transmitting the foundations of the Jain doctrine through the centuries. Sitting on a cushion, in the position of the lotus or vajraparyankâsana diamond, the jina Rishabhanâtha is figured naked. His hands united in the lap, sketch the gesture of meditation dhynana mudra. His hairstyle with stylized curls regularly wound, some of which fall back into locks on his two shoulders, makes it possible to identify it with certainty because he is the only one of all tîrthankhara to be thus capped. Immersed here in an unfathomable meditation, the jina seems to be abstracting both secular attachments and terrestrial contingencies. The double requirement of inner purity and liberating asceticism contained in the immobility of his pose and the impassibility of his face is particularly well rendered here. The sculptor was able to combine, with great mastery and in a harmonious way, the sober iconographic canons of the aesthetic Jain, with the purified and yet radiant forms of medieval Indian statuary candella of the 11th-12th centuries.

This jina was particularly venerated by the sect of the Digamaras clothed in space which dedicated to it three temples, that of Pârsvanâtha, Ghantâi and Adinâth, built on the sideline of Khajurâho, the former capital of the Candella dynasty. Nearly sixty images of this first jina of the tithankhara were counted in these places. Rishabhanatha is sometimes represented standing there, frozen in an integral nakedness, we meet more generally, sitting in the same attitude of meditation. 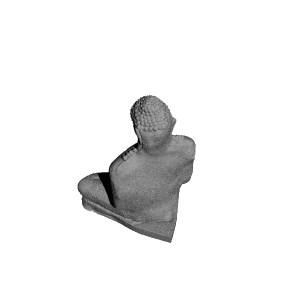