3D
Scan The World
7,099 views 522 downloads
4 collections
Community Prints Add your picture
Be the first to share a picture of this printed object
0 comments

In the section above dealing with the calvary we have made reference to Richier's work in the church of St Ėtienne in Bar-le-Duc. There is a second Richier work is this Bar-le-Duc church, a work known as the "Transi" as shown in the photograph above. It is a macabre work and an example of écorché.

This sculpture was originally housed in the collegiate church of Saint-Maxe in Bar-le-Duc, which was abandoned in 1782.

This work, also known as the "Death as a skeleton" or the "Squelette de Bar" is a memorial to Renė de Chalon, the brother-in-law of Duke Antoine of Lorraine. There is a cast of the work in the Musée barrois in Bar-le-Duc. The Meuse tourist office have produced a brochure covering the two works which opens with words by Bernard Noël, the French writer and poet

"The spectator today, who so frequently hears of people being tortured to death and of death without salvation, can see this "Death as a skeleton" as a ghost that may well come back to haunt us, but what symbolism should be attributed to the heart?”

The brochure then explains that Gilles de Trèves, the Dean of Saint-Maxe’s Collegiate Church, had invited Ligier Richier to visit Bar in around 1540-1549 and to undertake extensive decorative work in the Chapel of the Princes. The work was completed in 1554. The brochure explains that Michel de Montaigne, who stayed in Bar in 1580, much admired the architecture and sculpture in polished stone and terra cotta, which must have been impressive at the time, but of which only a few fragments remain. Saint-Maxe’s Collegiate Church was demolished during the French Revolution and what was left of Ligier’s work is now in Saint Etienne’s Church. Around 1550, Richier sculpted one of the most famous funerary monuments of the French Renaissance, "Death of a Skeleton". The brochure explains that the work is a memorial to the heart of René de Chalon, the Duke Antoine of Lorraine’s brother-in-law. The figure holds de Chalon's heart up to heaven whilst the other hand rests on its chest. On the Calvary the brochure reads "Prior to Ligier Richier, many of Lorraine sculptors’ workshops had already produced versions of the bloodier aspects of Christ’s Passion, a popular religious theme in Lorraine at the time". The work is 1.75 metres high. Originally this work was located in the collegiate church of St Maxe and was placed over a burial vault which held the hearts of Duke Antoine de Lorraine, René de Chalon and other family members. According to Paul Denis the work was moved from St Maxe in June 1790.

In 1810 the vicar of Saint-Étienne, Claude Rollet, issued a paper giving a full description of the work and in 1894 a model was made for the Musée de sculpture du Trocadéro. In 1898 the statue was classified as a "monument historique". Interesting to note that during the Great War 1914-1918, the "Squelette" was moved to Paris for its protection and deposited in the cellars of the Panthéon until the end of the war. It was returned to the church in 1920. It was restored in 1969 by Maxime Chiquet d’Alliancelles. In 1993 the retable and the tomb itself were also classified as historic monuments and were also restored.

This model prints beautifully upright at a layer height of 0.1 mm. Make sure to use supports and I recommend a slower print speed to achieve best results. *note* the upright hand and heart can be difficult if printed at high speed. 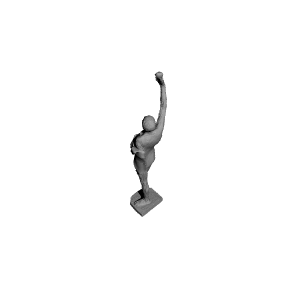 ×
4 collections where you can find Le Transi de Rene de Chalon at The Musée des Monuments Francais, France by Threedscans