Leda and the Swan

3D
360°
Featured Scan The World
3,862 views 376 downloads
5 collections
Community Prints Add your picture
Be the first to share a picture of this printed object
0 comments

Leda and the Swan

This statue, by the Danish sculptor Kai Nielsen (1882-1924), depicts the mythological narrative of Leda and the Swan. In the infamous Greek story Zeus, in the form of a swan, seduces Leda. According to later Greek mythology, Leda bore Helen and Polydeuces.

The subject undoubtedly owed its sixteenth-century popularity to the paradox that it was considered more acceptable to depict a woman in the act of copulation with a swan than with a man. 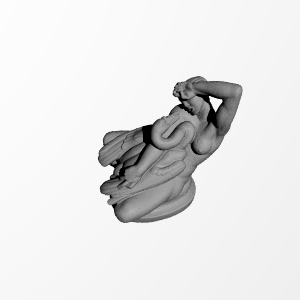