3D
Scan The World
7,940 views 439 downloads
2 collections
Community Prints Add your picture
Be the first to share a picture of this printed object
0 comments

Leif Erikson or Leif Ericson was an explorer regarded as the first European to land in North America (excluding Greenland), nearly 500 years before Christopher Columbus. According to the Sagas of Icelanders, he established a Norse settlement at Vinland, tentatively identified with the Norse L'Anse aux Meadows on the northern tip of Newfoundland in modern-day Canada.

It is believed that Leif was born in Iceland around the 970s—the son of mother Thjóðhildr and father Erik the Red, an explorer and outlaw from Western Norway. Erik founded the first Norse colonies in Greenland, and was based at the family estate Brattahlíð in the so-called Eastern Settlement, where Leif had his upbringing. Leif had two known sons: Thorgils, born to noblewoman Thorgunna in the Hebrides; and Thorkell, who succeeded him as chieftain of the Greenland settlement.

This bust was scanned in front of the Leif Erikjson Hall in Seattle, Washington in the USA. 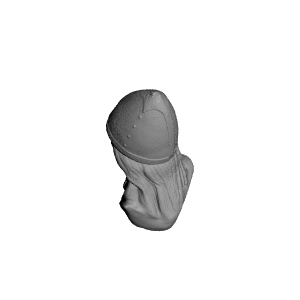