The sculptor of the Parthenon Pheidias made a bronze Athena that stood on the Acropolis in Athens. It was dedicated and paid for by a colony of Athenians on the island of Lemnos in the north Aegean Sea, shortly after they began living there in 451 BCE.

This is another Roman copy of the lost bronze original, and probably found in Rome. Headless when found, it has been augmented in this cast by the addition of the Bologna Head. Athena probably stood with a spear in her left hand and a winged victory or libation bowl in her right. It is thought that in the original by Pheidias she did not wear a helmet, unlike many sculptures of Athena. 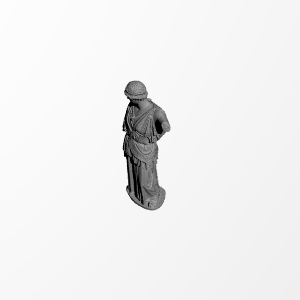