3D
11,629 views 349 downloads
4 collections
Community Prints Add your picture
Be the first to share a picture of this printed object
0 comments

An art work depicting a cerberus of Lenin. This sculpture shows Lenin holding the symbolic hammer and sickle, representative of the workers and the peasants. was a Russian communist revolutionary, politician and political theorist. He served as leader of the Russian Soviet Federative Socialist Republic from 1917, then concurrently as Premier of the Soviet Union from 1922 until his death. Under his administration, the Russian Empire was replaced by the Soviet Union and all wealth including land, industry and business was nationalized. Based in Marxism, his political theories are known as Leninism. 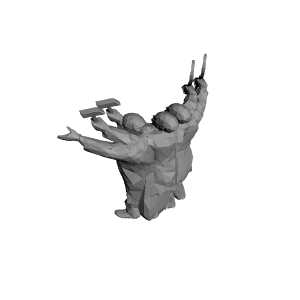 ×
4 collections where you can find Lenin Cerberus by crbz