3D
Scan The World
2,762 views 279 downloads
Community Prints Add your picture
Be the first to share a picture of this printed object
0 comments

This equestrial statue of King Leopold II was inauguarted the 15th november 1926, at near bout the very place where Leopold II took the oath.

Leopold II (9 April 1835 – 17 December 1909) was the second King of the Belgians, known for the founding and exploitation of the Congo Free State as a private venture. Born in Brussels as the second (but eldest surviving) son of Leopold I and Louise of Orleans. He succeeded his father to the Belgian throne in 1865 and reigned for 44 years until his death. His was the longest reign of any Belgian monarch. He died without surviving male issue; the current Belgian king descends from his nephew and successor, Albert I. 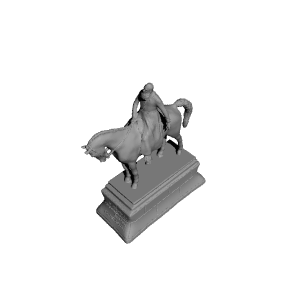