Liberty Enlightening The World in the Jardin du Luxembourg, Paris

3D
Scan The World
4,633 views 256 downloads
3 collections
Community Prints Add your picture
Be the first to share a picture of this printed object
0 comments

Liberty Enlightening The World in the Jardin du Luxembourg, Paris

This is one of a series of original replicas or maquettes of the colossal neoclassical sculpture on Liberty Island in New York. This is one of the developmental stages of the copper statue, designed by Frederic Auguste Bartholdi. The 93 metre tall sculpture was given as a gift to the United States from the people of France on the 28th October 1886. The statue is of a robed female figure representing Libertas, the Roman goddess, who bears a torch and a tabula ansata (a tablet evoking the law) upon which is inscribed the date of the American Declaration of Independence, July 4, 1776. A broken chain lies at her feet. The statue is an icon of freedom and of the United States.

On the occasion of the Exposition Universelle of 1900, Bartholdi crafted a smaller version of the Statue of Liberty, which he subsequently gave to the Musée du Luxembourg. In 1905, the statue was placed outside the museum in the Jardin du Luxembourg, where it stood for over a century, until 2012. It currently stands at the entrance to the Musée d'Orsay; a newly constructed bronze replica stands in its place in the Jardin du Luxembourg. The date written on this statue's tablet (where the New York statue has "JULY IV MDCCLXXVI") is "15 novembre 1889" (November 15, 1889), the date at which the larger Parisian replica was inaugurated.

Bartholdi was inspired by French law professor and politician Édouard René de Laboulaye, who is said to have commented in 1865 that any monument raised to American independence would properly be a joint project of the French and American people. 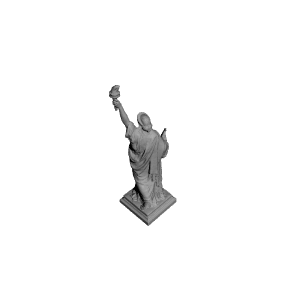 ×
3 collections where you can find Liberty Enlightening The World in the Jardin du Luxembourg, Paris by Scan The World