This 3D model is of the old water fountain and trough in the village of Lickey, south of Birmingham in the UK. According to the inscriptions it was erected in 1906 and was 'Erected by the Earl of Plymouth and subscribers to the North Worcester Fund raised to celebrate the coronation of King Edward VII 1902'. The inscription on the plaque at the end of the trough also says it was 'Restored by the Bromsgrove Society and Lickey and Blackwell Parish Council 2006'.

The main water fountain structure was made using OpenSCAD based on measurements taken on-site using a LASER-measure. That was then imported into Blender where the trough was modelled based on 3D scans. The carvings were then added from 3D scans pre-processed in Meshmixer. The combined model was then solidified using Nomad Sculpt on Android, as a test of its voxel-remeshing which turned out very well. All 3D scanning was done using the excellent Sony 3DCreator app on an Xperia XZ2 smartphone. So the model cannot be considered completely accurate but is a good representation of the style and design.

For more information about the water trough please feel free to follow the links below: 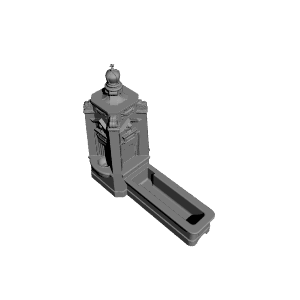 ×
0 collections where you can find Lickey Water Trough by portablecomputing