Lying scattered beside Ankhshepenwepet's coffin were four dummy canopic jars made of solid limestone, with crudely-carved features. Their "tops" are indicated by rough black lines, and additional black paint has been used to enhance the faces of the deities.

In earlier periods, the viscera (lungs, liver, stomach, and intestines) were removed from the body and separately mummified, then placed in high-shouldered jars now known as canopic jars. The earliest examples have simple tops, but by the Middle Kingdom, the stoppers were in the form of human heads. Later examples have the heads of the four "canopic" deities who protected these parts of the mummy: Hapy (baboon-headed, lungs); Duamutef (jackal-headed, stomach); Qebehsenuef (hawk-headed, intestines); and Imsety (human-headed, liver). By the 25th Dynasty, the organs were typically preserved, wrapped, and returned to the body, so there was no longer a need for actual jars. However, since such vessels had been a standard part of the funerarly equipment for thousands of years (since about 2500 B.C.), dummy jars such as these might be included instead.

This jar represents the falcon-headed Qebehsenuef, guardian of the intestines. 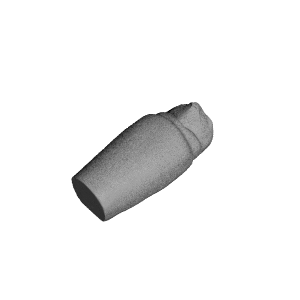 ×
3 collections where you can find Limestone dummy canopic jar: Qebehsenuef by Scan The World