Linga with Face of Shiva (Ekamukhalinga)

3D
360°
Featured Scan The World
1,960 views 138 downloads
3 collections
Community Prints Add your picture
Be the first to share a picture of this printed object
0 comments

Linga with Face of Shiva (Ekamukhalinga)

The linga, the aniconic pillar symbol emblematic of the Hindu god Shiva, symbolizes his essential generative powers. Here, the form is phallic, addorsed with Shiva’s face in a style reflecting iconographic innovations of the region as well as inherited design conventions from fifth-and sixth-century Gupta north India. The Shahi kingdom flourished in eastern Afghanistan only from the seventh to the ninth century, yet it produced a highly distinctive corpus of Hindu religious imagery. Typically sculpted in white marble, these works reflect links east, most notably to Kashmir for Shaiva imagery, and west, as seen in the flying locks of hair inspired by Sasanian royal imagery. 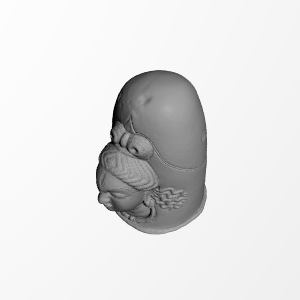