3D
Scan The World
3,923 views 209 downloads
1 collection
Community Prints Add your picture
Be the first to share a picture of this printed object
0 comments

The Columbus Monument (Catalan: Monument a Colom, IPA: [munuˈment ə kuˈɫom]; Spanish: Monumento a Colón or Mirador de Colón) is a 60 m (197 ft) tall monument to Christopher Columbus at the lower end of La Rambla, Barcelona, Catalonia, Spain. It was constructed for the Exposición Universal de Barcelona (1888) in honor to Columbus first voyage to the Americas. The monument serves as a reminder that Christopher Columbus reported to Queen Isabella I and King Ferdinand V in Barcelona after his first trip to the new continent.

This is one of the two lions which is placed besides the staircase to the monument. At the base is a circular structure (20 meter in diameter), built of freestone; it is about 1.2 meter above the level of the aquare. it is broken by four staircases of 6 meter wide, each flanked by two bronze lions, those on the NW and SE side couchant, those on the SW and NE side standing. These lions were sculpted by Agapit Vallmitjana, and cast by Wohlguemut. Each lion has the signature:

a. wohlguemuth,
ingeniero constructor.
barcelona.
1887
This object is part of "Scan The World". Scan the World is a non-profit initiative introduced by MyMiniFactory, through which we are creating a digital archive of fully 3D printable sculptures, artworks and landmarks from across the globe for the public to access for free. Scan the World is an open source, community effort, if you have interesting items around you and would like to contribute, email stw@myminifactory.com to find out how you can help. 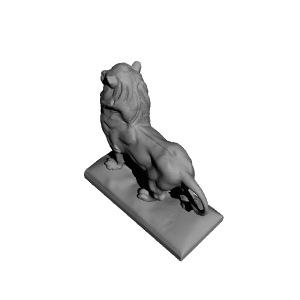 ×
1 collections where you can find Lion at the base of the Columbus Monument in Barcelona, Spain by 3DLirious