3D
Scan The World
4,880 views 549 downloads
Community Prints Add your picture
Be the first to share a picture of this printed object
0 comments

This great scan was made by Rigsters using photogrammetry: https://sketchfab.com/models/d5e6b6a11da646f68a5fcba661dcae99#

I edited the mesh a bit, scaled and oriented it and made a flat base.

Although his contemporaries criticized his style and his choice of animal subjects, Barye is today esteemed as the founder of the Parisian animaliers. The noble lion, representing the new King and the people of France, is shown in a triumphant struggle against the serpent, symbolizing Charles X (reigned 1824–1830) and the ousted Bourbon dynasty. The pair additionally suggests a celestial sanction for Louis-Philippe’s reign by alluding to the constellations of Leo (the lion) and Hydra (the sea serpent), which “ruled the heavens” during the days of the July Revolution (July 27-30, 1830).

The scanned sculpture is a copy made by Guy Hain, who is a French art forger who produced number of fake bronze sculptures. The Lion is located by the entrance of Ny Carlsberg Glyptotek in Copenhagen. 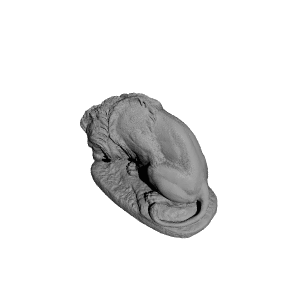