3D
Scan The World
2,391 views 98 downloads
Community Prints Add your picture
Be the first to share a picture of this printed object
0 comments

THis vase, in the shape of a drinking horn (rhyton) ending with the head and the pawns of a lion-griffin, was used as a fountain decoration, the waterflowed from a hole between the animal's front paws. on th erim of the horn was  a frieze with Maenads. THe work reproduces, on a smaller scale, the vase signed by the Greek artist Pontios preserved in the Capitoline Museums and derived from the metal prototype. End of the 1st century BC. 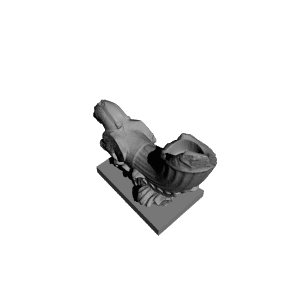