3D
Scan The World
2,644 views 549 downloads
7 collections
Community Prints Add your picture
Be the first to share a picture of this printed object
1 comments

The Lion of Aspern is a war memorial created by Anton Dominik Fernkorn, which was erected in 1858 at Asperner Heldenplatz (today a district of Vienna). The sculpture is made of sandstone and commemorates the Austrian soldiers who died in the battle of Aspern.

Fernkorn created a larger-than-life sculpture of a lying, dying lion on a stone base with an oak leaf garland on a stone foundation. Between the front paws is a Napoleonic eagle, under the body an emperor’s cloak, and on the left side of the body are field signs. The lion is pierced by a lance whose tip protrudes behind the left shoulder blade of the animal below the mane 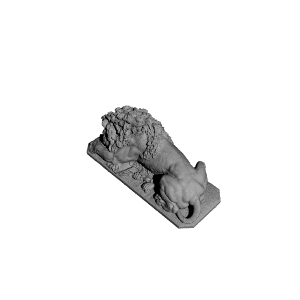