3D
Scan The World
8,869 views 455 downloads
1 collection
Community Prints Add your picture
Be the first to share a picture of this printed object
0 comments

From Nimrud (ancient Kalhu), northern Iraq
Neo-Assyrian, about 883-859 BC

In 2014 the Islamic State of Iraq and the Levant (ISIL) occupied the Mosul Museum in Iraq as it was about to reopen after years of rebuilding. The group claimed that its statues were against Islam and threatened to destroy the museum's contents. On 26th February 2015, a day after burning books from Mosul libraries, the group released a video showing the destruction of the artifacts in the museum.

To rise against the rhetoric of hate with which these acts of destruction have been associated and instead focusing on a message of hope, numerous communites from across the world united to create a means of protecting and restoring these lost cultural relics. This group of likeminded people formed Project Mosul, a volunteer initiative intending to create virtual models of the objects. The group aim to "preserve our shared memory and connections to our cultural heritage, even renew and invigorate it, regardless of the acts of destruction currently being perpetrated upon it" (source).

The project uses crowd-sourced images, calling out to past visitors of the museums to submit their photographs in order to virtually recreate the artefacts in 3D using the latest in photogrammetry techniques. The 3D representations are now presented in an online museum where the data is freely accessible to the public. Using the internet as a non-political, free ground for making these works available to anyone around the world.

"The 3D objects may initially serve in helping identify stolen items and aid researchers working on the destroyed items. Virtual reconstruction is not an end in itself, however, but the start of a reengagement with the meaning of these objects. It is hoped that the virtual representations will give an additional tool to the communities that wish to think about, learn about, and work on the preservation and dissemination of these important elements of a national, regional and global history, and to return a sense of agency to those left helpless in the face of the destruction of their heritage."

With a team proficient in 3D designer, academic art historians and photogrammetry researchers, Scan The World is aiming to help the project expand further. Through displacing the textures from the images provided, the team aims to recreate the artifacts as fully 3D printable pieces, as photographically accurate as possible. The texture of the 3D models mask much of the quality of the sculpture which is why a lot of time is taken to ensure that the models we produce for Project Mosul and the rest of the Scan The World archive are as true to the original referent as possible.

These revived sculptures will be made physically available to anyone and aim to accurately restore the pieces to their rightful glory.

This gigantic standing lion, roaring angrily, formed one of a pair carved half in the round which once flanked the entrance of a small temple dedicated to the goddess Ishtar, adjoining the palace of King Ashurnasirpal II (reigned 883-859 BC). The temple was excavated by Henry Layard in 1849.

The placing of figures of lions beside the doors of temples or the gates of cities was an ancient custom in Mesopotamia. Actual lions were common in the region and survived there until the nineteenth century.

The fifth leg is an artistic convention to enable the figure to be seen either from the side, walking, or from the front, standing. Compare this with the colossal statue of a winged human-headed bull from the palace of Ashurnasirpal II, also in the British Museum.

The lion is covered with a dedication in cuneiform, consisting of a prayer by Ashurnasirpal to a version of Ishtar called Sharrat-niphi, followed by a record of some of his achievements. Ishtar was one of the most important deities of Assyria. Here main cult centres were at Nineveh and Arbela. The lioness was her symbol as the goddess of fertility and warfare. 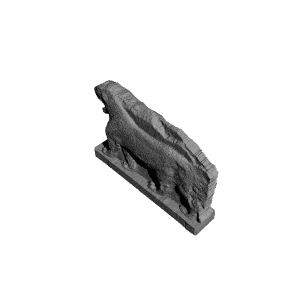 ×
1 collections where you can find Lion of Mosul at The Mosul Museum, Iraq by Scan The World