3D
Scan The World
2,386 views 119 downloads
1 collection
Community Prints Add your picture
Be the first to share a picture of this printed object
0 comments

Lioness-head rhyton of translucent limestone with a hole in the muzzle for pouring out the liquid offering. An exquisitely modelled work, a typical example of the specialised stone-carvers' skill in faithfully rendering the original. The nose and eyes were originally inlaid with materials which have not survived.

A rhyton (plural rhytons or, following the Greek plural,rhyta) is a container from which fluids were intended to be drunk or to be poured in some ceremony such as libation. The English word rhyton originates in the ancient Greek word ῥυτόν (rhy̆tón or rhŭtón) 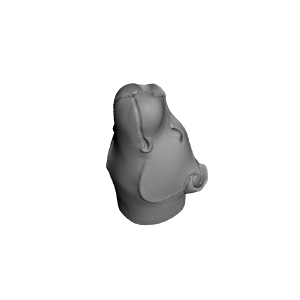 ×
1 collections where you can find Lioness-headed rhyton at The Heraklion Archaeological Museum, Belgium by Scan The World