3D
360°
Scan The World
2,870 views 44 downloads
Community Prints Add your picture
Be the first to share a picture of this printed object
0 comments

A lithopedion, or stone baby, is a rare phenomenon which occurs most commonly when a fetus dies during an abdominal pregnancy, is too large to be reabsorbed by the body, and calcifies on the outside as part of a foreign body reaction, shielding the mother's body from the dead tissue of the fetus and preventing infection.

In 1720, 91-year-old Anna Müller insisted on her deathbed that she had been carrying a child for 46 years. She asked her pastor and the doctor to get it out after her death. The autopsy found a rock-hard structure. One opened it with a hatchet and found therein a dead fetus. The stone child was handed over to the ducal Kunstkammer in Stuttgart. 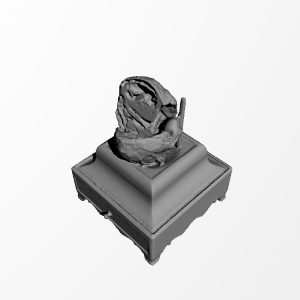