Lithophane for the Luce Chapel

3D
1,752 views 19 downloads
Community Prints Add your picture
Be the first to share a picture of this printed object
0 comments

Lithophane for the Luce Chapel

This is the #Cura lithophane for the Luce Chapel.

The Luce Memorial Chapel (Chinese: 路思義教堂; pinyin: Lùsī Yì Jiàotáng) is a Christian chapel on the campus of Tunghai University in Xitun District, Taichung, Taiwan. It was designed by the firm of noted architect I. M. Pei (Chinese: 貝聿銘), who was also responsible for the master plan and the early development of the campus of Tunghai University, with likely participation by architects Chi-kuan Chen (Chinese: 陳其寬) and Chao-kang Chang (Chinese: 張肇康). The chapel was named in honor of the Rev. Henry W. Luce, an American missionary in China in the late 19th century and father of publisher Henry R. Luce.

The chapel is located on a 3-acre zone in the center of campus, and is set on an irregular hexagonal base, providing 477 m² of gross floor area, including the 245 m² nave (with 500 seats), 81 m² chancel, and 44 m² robing rooms. The church itself is a tent-like conoid structure, with four warped leaves rising to 19.2 m high, establishing itself as a central landmark on campus.

The chapel was first conceived as a multi-planar, wooden structure, but the architects soon abandoned the idea of using wood due both to the humid environment and to seismic concerns. The form of four curved surfaces built with reinforced concrete was likely influenced by the design of the Philips Pavilion, designed by renowned architect Le Corbusier for the Brussels World’s Fair (known as Expo 58) in 1958. However, unlike the Philips Pavilion and other contemporary ruled-surface buildings of the era, Luce Chapel is not a thin-shell structure. The chapel’s planes are composed of lattice beams that gradually grow thicker as they descend. The structural concept might be influenced by that of the Yale University Art Gallery, completed in 1953 and designed by Louis Kahn, another noted architect of the time. The exterior of the Chapel is covered with yellow, glazed, diamond-shaped tiles echoing the diamond-shaped coffer beams on the building’s interior. The Chapel’s elaborate reinforced concrete formwork was created by local craftsmen. 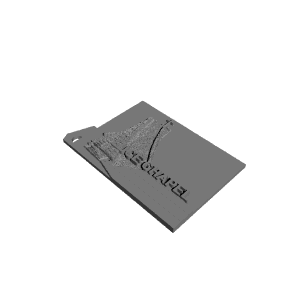