Little Prince and the Rose

Little Prince and the Rose

This is a sculpture illustrating The Little Prince, first published in April 1943, a novella, the most famous work of French aristocrat, writer, poet, and pioneering aviator Antoine de Saint-Exupéry.

The novella is one of the most translated books in the world and has been voted the best book of the 20th century in France. Translated into 300 languages and dialects, selling nearly two million copies annually, and with year-to-date sales of over 140 million copies worldwide, it has become one of the best-selling books ever published

The rose is the object of the little prince's affection. She is beautiful and vain, given to telling dramatic lies, which prompts the little prince to leave his planet and set off on his journey. She apologizes right before he leaves, but he decides to go anyway—eventually, he feels sorry for leaving her and tries to return to his planet to protect her. 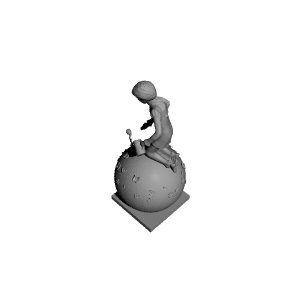