3D
Scan The World
6,706 views 813 downloads
6 collections
Community Prints Add your picture
Be the first to share a picture of this printed object
1 comments

Plaster Cast of Giuliano de 'Medici (Duke of Nemours, b. 1478; d.1564) after the marble original in the Medici Chapel (the New Sacristy) in the church of S. Lorenzo, Florence.

The decorations of the Medici funerary chapel was commissioned from Michelangelo in 1520 by Cardinal Giulio de 'Medici, afterwards Pope Clement VII (1478-1534). The figure of Giuliano (1479-1516) is seated in a niche above his tomb on which recline allegorical figures of Night and Day. On the opposite wall is the companion figure of Giuliano's nephew, Lorenzo de 'Medici, Duke of Urbino (1492-1519), with Dawn and Dusk on his tomb. 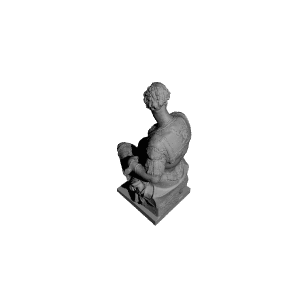 ×
6 collections where you can find Giuliano de Medici, Duke of Nemours by vam