3D
Scan The World
7,528 views 804 downloads
13 collections
Community Prints Add your picture
Be the first to share a picture of this printed object
0 comments

Louis XIV, known as the Sun King (le Roi Soleil), was a monarch of the House of Bourbon who reigned as King of France from 1643 until his death in 1715. His reign of 72 years and 110 days is the longest recorded of any monarch of a sovereign country in European history. In the age of absolutism in Europe, Louis XIV's France was a leader in the growing centralization of power.

This bust was made after a scupture by Lorenzeo Bernini from the 17th century.

The Bust of Louis XIV is a marble portrait by the Italian artist Gian Lorenzo Bernini. It was created in the year 1665 during Bernini's visit to Paris. This sculptural portrait of Louis XIV of France has been called the "grandest piece of portraiture of the baroque age". The bust is on display at the Versailles Palace, in the Salon de Diane in the King's Grand Apartment. 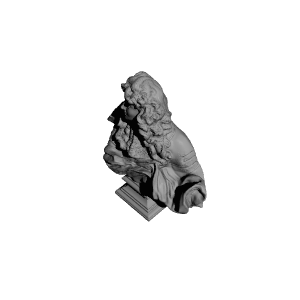 ×
13 collections where you can find Louis XIV by 3DLirious